The Pyramid at Grand Oasis reviews

With Cancun Mexico being open to visitors, I've come across a great spot called The Pyramid at Grand Oasis. This is my review of the resort and the rundown of my adventure in Quintana Roo. This may be Cancun's best-kept secret, the #Pyramid​ at #GrandOasis​ #Cancun. 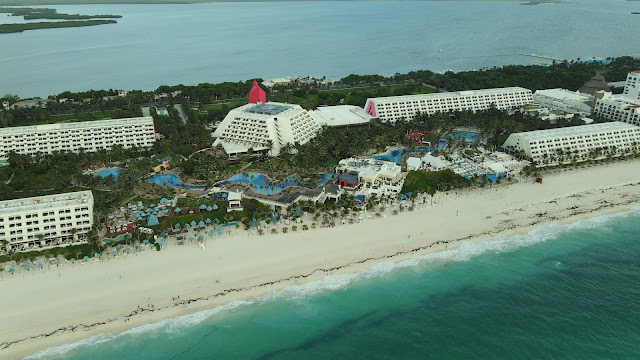 Whenever anyone used to ask me where the most beautiful resort that I've traveled to, I always used to say the Grand Palladium Lady Hamilton in Jamaica.

The Pyramid at Grand Oases is everything you would expect a 5-star resort to be!

Most of the people you will run into and make friends with will be Mexican natives who are just taking a Cancun vacation from their everyday lives in other cities in Mexico. 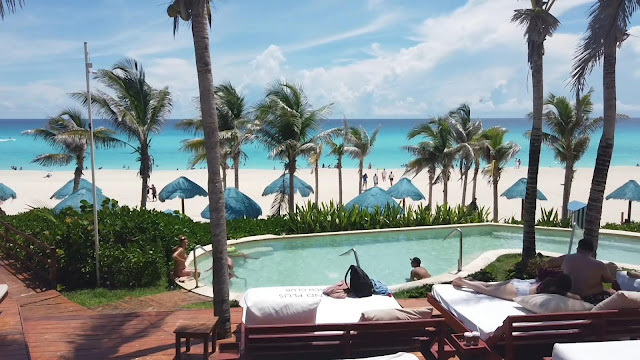 The Pyramid at Grand Oasis 2021 review

That fact is very similar to what I experienced in Grand Palladium Costa Mujeres a few weeks earlier.

The Covid Pandemic mixed with a lack of leadership in the beginning stages of learning about this virus, in the United States, left us with only a few options to travel to.

Mexico reopened its borders to us on August 15th.

If you saw my previous two videos, I just went to Cabo San Lucas in Mexico just a few weeks prior and I really wanted to try a different location for this holiday but I honestly couldn't find many more options open to us right now

Reluctantly, my brother and I settled on Mexico and I'm so happy that I did!

This area in Cancun is a lot more festive than when I went to the Grand Palladium Costa Mujeres and that resort was a little further out and away from the airport.

There is lush greenery for as far as your eye can see from your hotel room window. 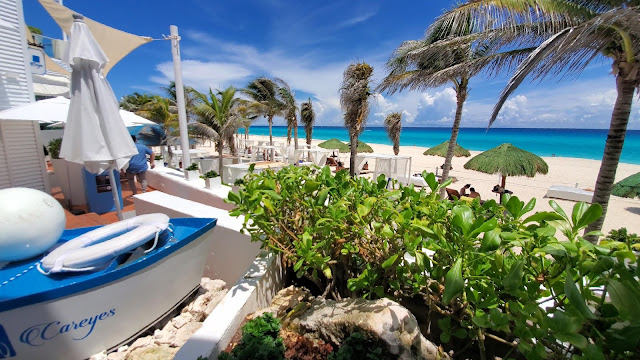 The people on the beach will be enjoying some of the Bluest water the world has to offer. The staff was extremely nice and there was always a gathering area, either at the little burger place on the beach, the bar, or 1 of the 24-hour restaurants.

If you are ready to book a large group (6 or more) to the Pyramid at Grand Oasis let passport kings take care of everything for your group! If you're going by yourself or as 1 couple, you can find the cheapest price on the homepage of this website

So now let's get to the food in the resort. The food that you will get for free with your all-inclusive wristband will be spectacular.

The Bahia steakhouse became my favorite dinner spot and although I had a very long wait I also ate at an establishment in the resort called Carries.

Also, "Tongue Cool" Food Hall was a buffet that I utilized for breakfast every morning.

They also serve dinner. Watching the cooks making your favorite Mexican-inspired breakfast, lunch, and dinner was another fantastic experience.

You will have many options and each night, I suggest you try a different restaurant.

This hotel chain includes The Pyramid Grand Oasis, which is where I stayed. Grand Oasis Cancun, which is known for its Vegas-style shows. Oasis Palms, which is specifically made for family vacations. Urban Oasis in downtown and Smart Cancun by Oasis for business trips. 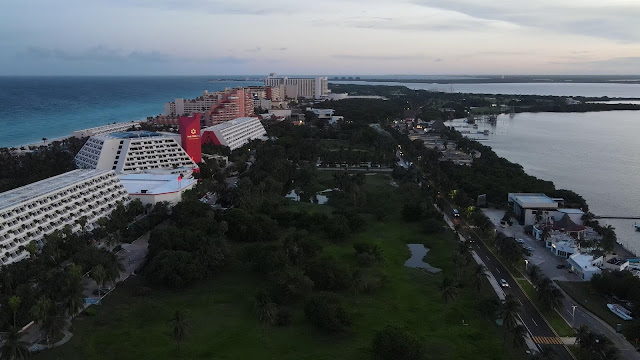 Staying on the Resort's Grounds is only where the fun begins!

The pyramid at Grand Oasis is on Isla Mujeres Quintana roo and this is considered the hotel zone. The one street named Kukulcan rides you in front of miles and miles of resorts, shops, and excursion activities.

When the sun begins to go down and if you're the party type I highly suggest you make your way down Kulkokin to a club called Coco Bongo.

The music was pumping, the drinks were flowing and the women were everywhere.

You will get the same vibe of Bourbon Street in New Orleans except it's much smaller, Spanish, and smells much better.

Some restaurants and bars will be playing classical Mexican music and others will be blasting up-to-date hip-hop out of its doors.

Hundreds of people will be dancing and sitting around the strip while some mariachi bands will just start jamming live. Everyone will be participating and having a great time with good vibes. 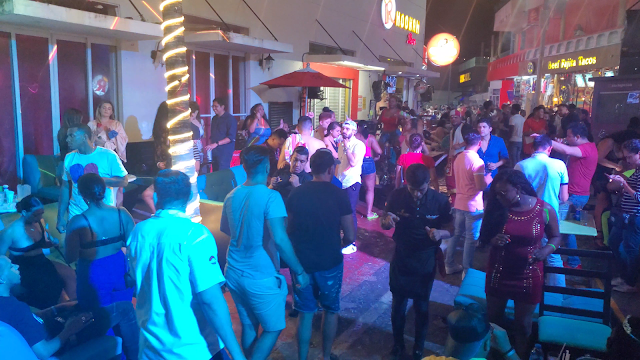 People who are not as crazy as me should take a cab that will cost about 7 dollars from the resort to the strip. But I'm an adventurer. And someone told me that I could get there by city bus and I was all for it

The bus was filled with people just getting off of work from the resorts.

It may seem like a daunting task to navigate your whereabouts. But once you pull up to the right area you'll know.

Since there seems to be only one street on the island it's almost impossible to get lost while searching for it.

BTW, there is an awesome sale going on with all Passport Kings Shirts. All the shirts that you see me wearing in the video and pictures are available. All proceeds will go toward me producing new Passport Kings videos and blogs.

Cancun is not just a Vacation Paradise. It's a real city!

1 of the propellers on my drone had gotten crushed while traveling.

I never expected that I'd be able to replace something so "hobby-like" in a vacation paradise.

After realizing that if I ordered a new one express from amazon prime, it would not get to the hotel in time, I decided to search in the neighborhood to see if, by any chance, I could find something. 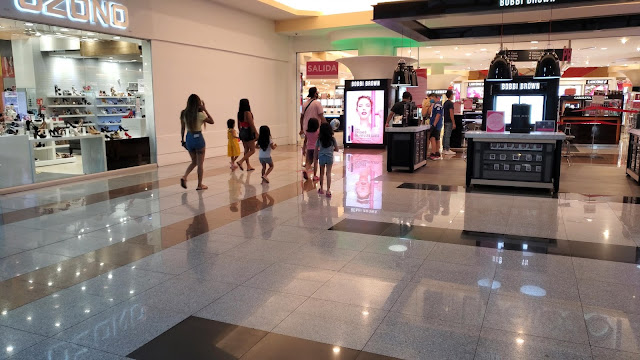 When you leave the hotel zone you will be awestruck! The Mexican people don't seem to be hurting for anything

I felt like I was traveling through a typical area of South Beach Florida. They had every story you could imagine. Liverpool was their version of Macy's. They had Radioshack, BestBuy, and most typical stores you would see in a mall in America. They even had Walmart.

After searching websites and failing to find what I needed by just roaming the malls, I eventually and unbelievably found an Official DJI store called Heliboss that only sold DJI products.

I got my drone fixed and my eyes were totally opened about where I was! The media is lying about Mexico being in bad shape.

I think that honestly if I was born in Cancun I would have no desire to try to migrate to the US. It's their home and they have everything we have here in America.

After that mission was accomplished, we did some of the excursions. I can't remember the name of the company that took me but it was maybe a 45-minute ride from the resort. 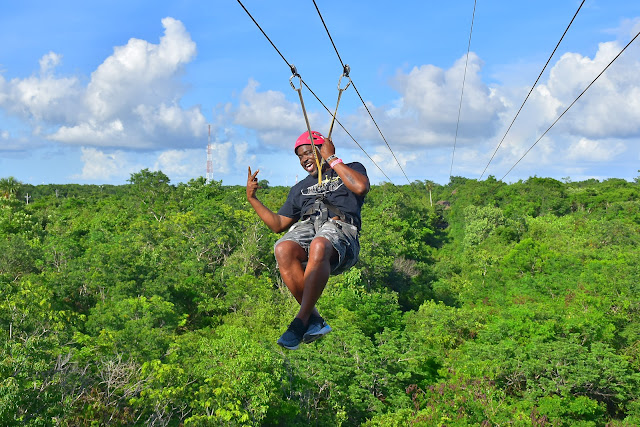 A vacation would not be a vacation without a little bit of zip lining, ATV riding, and swimming in an ancient Mayan Batcave for good measure. We also attended a good spirits seance to have the Mayan Gods keep us safe.

It was kind of run-of-the-mill, but we had a great time and you would too.

The only issue I had with them was they wouldn't let me film my own videos of the excursions. They claimed that it was too dangerous for me to have my cameras out. So I had to buy the pictures that they were selling.

Of course, they marked up the hell out of their pictures, which were mostly good pictures but they were so expensive

I felt ripped off after I paid for them!

I guess that money loss was the reason I couldn't remember their name or recommend them in my blog.

All in all, I really had a great time in my few days vacationing at The Pyramid at Grand Oasis.

Cons of The Grand Oasis

The only thing that I would suggest you stay away from is the pizza that the resort makes.

For some reason, they have a very strange Pizza recipe. It was not very pleasing. I'm originally from New York City where even 99 cent slices of Pizza were great.

Maybe Grand Oasis has a European-inspired recipe but isn't Italy in Europe?

I feel like they took all of the worst possible cheeses (like goat cheese and fermented and aged cheeses) and tossed it on a flatbread with tomato sauce. There is NOTHING traditional about this Pizza.

But, you can tell I had a great time if Pizza is the only thing I can complain about. 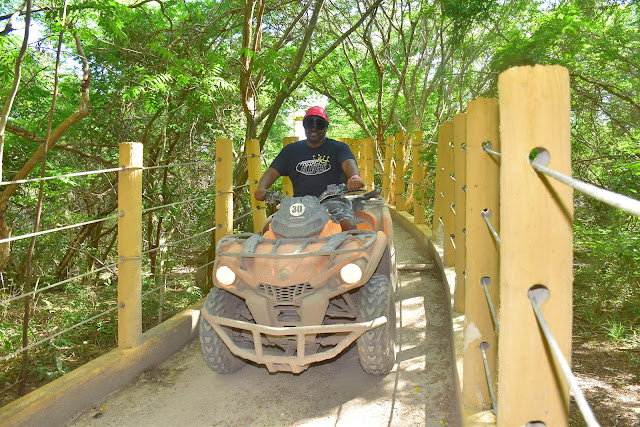 A lot of people ask me what's the secret to traveling to places like this.

There is no secret. first I prioritize travel because travel makes me happy. 2ndly, I am very upfront about being a part of Plannet Marketing.

If you would like to join the 8-15 trillion dollar travel industry and get your slice of that pie, I would love to introduce you to this opportunity that I have been using to make money and travel more.

Have you been traveling since the pandemic hit? Type "I'm a travel head" in the comment section below and tell me about your experience.

I would love to read about it and I love to respond to my comments.

My trips to Mexico in 2020 have really opened my eyes to how fly Mexico is and how cool the Mexican people are.

I attended an all-night Bachelor Party for a groom that I just met. We all drank and partied on the beach until the sun came up, LITERALLY! 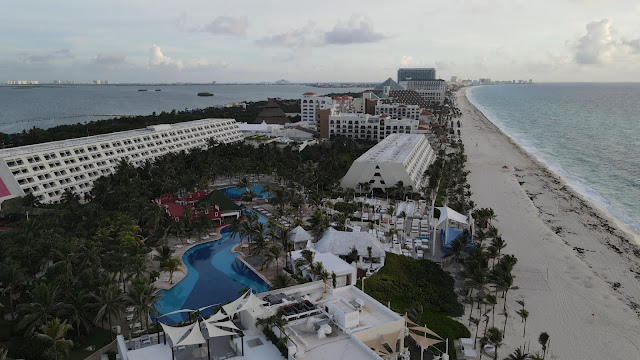 It was really an unforgettable experience. I recommend it to anyone going to Cancun this year.

You will meet a lot of cool down-to-earth Mexicans at the Pyramid at Grand Oasis. If this quarantine doesn't light up soon I suggest you get on the next thing smoking to Mexico like a king...