Royal Caribbean is now a Better cruise line than Carnival

Royal Caribbean is now a Better cruise line than Carnival

The last time I did a countdown about which cruises are the best for your money, Carnival came out on top.

Carnival had the most affordable 4-7 day cruises and the atmosphere was young and friendly. I guess Royal Caribbean got the picture because they have done many things to upgrade their services and appearance.


While both cruise lines have ships ranging from older: 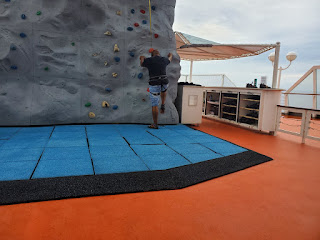 Consider that Royal Caribbean’s Symphony of the Seas is nearly 1,200 feet and carries more than 5,500 guests. Carnival Vista is a full 120 feet shorter and carries under 4,000 passengers. When it comes to size, Royal Caribbean ships definitely have an edge.

When it comes to ports. And drop offs for the day, this is where Royal Caribbean truly shines. Royal has not 1 but 2 of it’s own private ports in their respective countries. CocoCay, formerly Little Stirrup Cay, is a Bahamian island located between the popular cruise ports of Freeport and Nassau ( all over the Bahamas is outstanding. Visit Atlantis, Jet ski, go snorkeling, parasailing and skooba diving. like a king). In 1990, Royal Caribbean started leasing the 140-acre plot of land, which features beaches, shopping venues and activities exclusively for passengers sailing with Royal Caribbean or sister line Celebrity Cruises.

Royal Caribbean's Labadee is a 260-acre private beach resort carved out of Haiti's rolling, densely forested north coast. A typical day in port might include snorkeling, filling up a plate or two at the all-you-can eat barbecue, zipping across the water on the 2,600-foot-long Dragon's Breath Flight Line or snoozing soundly in a beach chair.

Going to Key West in Florida can be just as fun. 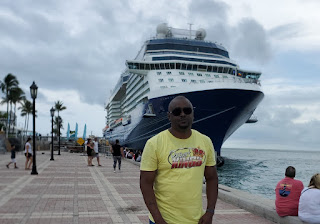 As you may know from one of my previous videos, I am very fond of Key West. There is a twilight zone vibe there that would be too hard describe without dedicating an entire video to it.

While walking out of your room you will her your name being called in a faint accent. You will wonder who the heck you know on the boat. Housekeeping will know you by name within the first hour of you stepping foot into your room. It may not sound like a lot but having a friendly staff who make it their business to let you know they appreciate you joining them for the next few days is the real icing on the cake.

I thought the drink package was a terribly expensive idea. Right now they are charging $300 for one person or $450 for 2 people who share the same room. The 2nd charge is mandatory if there are 2 people in your room. I was like NO-WAY when this pricing was told to me. But right after the safety demonstration in the muster station, I went a brought a round of drinks for everyone who was with me. When looking at the bill, which was almost $50 bucks, it became apparent to me that I would easily spend more than the $300 by the time we finished with 5 nights. I got the package and even though I would still by drinks while on the islands, knowing that I can have as many of whatever top shelf liquor I wanted on the boat was peace of mind. If you drink, I suggest you get your drink package within hours of boarding the ship. Grand Bahama cruises still beats them both when it comes to drink because they let you buy your own bottle while boarding the ship for the first time, which you can drink during the cruise. No other ship I've been on lets you do that. The prices of bottles are marked up, but the savings is incredible when you don’t have to visit the bar, spending b$15 to $20 each visit.

When it comes to cruise food, 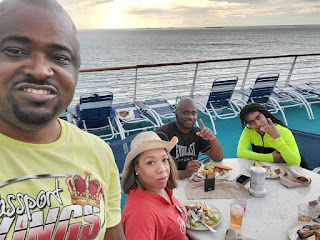 I have never really had a bad experience. Even cruises with super duper reduced rates have cooks that you can care takes food prep seriously. The buffets are really all you need to pig out during breakfast lunch and dinner. The selections are sometimes themed bt they will have a little bit of everything. Even for vegans your selection will be vast. And If you want to go get a bite to eat after hours, like 3am-5am, the ship that I was on gives you the option of all kinds of Pizza on the 12th floor and a Great Deli that’s slicing cooked meats which allows you to create fancy sandwiches. I have to admit that every cruise I have been on, I was that person who was still out of my room really late of the club looking for something to eat. All of the cruises has very limited options this time of night, but wait an hour or 2 and it will be breakfast anyway. Oh and at dinner, don’t limit yourself to one entree, order 2 and the wait staff will happily bring both. Pigging out

But what really changed my mind about who is king of the seas, 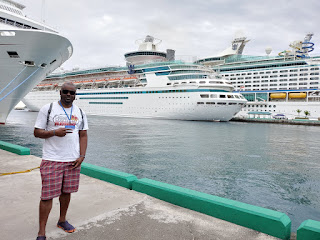 ...is the noticeable change in Vibes.
This is no longer the ship for old stuffy conceited snobs. Royal has turned “cool.” The night club played music you would hope to find at a party. The people participated in the events which can sometimes be tricky depending on who just happens to be cruising on the same day as you. And the fact that they have 2 super cool exclusive islands makes it a no brainier for people who just love visiting different cultures.

Like most preferences, the decision of which cruise line is better is subjective. Many people are unwavering fans of one ship over another, I was like that with Carnival for years — and won’t hear anything otherwise. And to be honest, both are about about 80% the same. It’s that other 20% that may sway you one way or another. Like big ships with lots to do and a crew’s attention to details and your happiness?
~ Roklan
Best Cruisesblack cruiseCarnival Cruisemake money to travelpassport kingsroyal caribbeanwhich cruise is better?